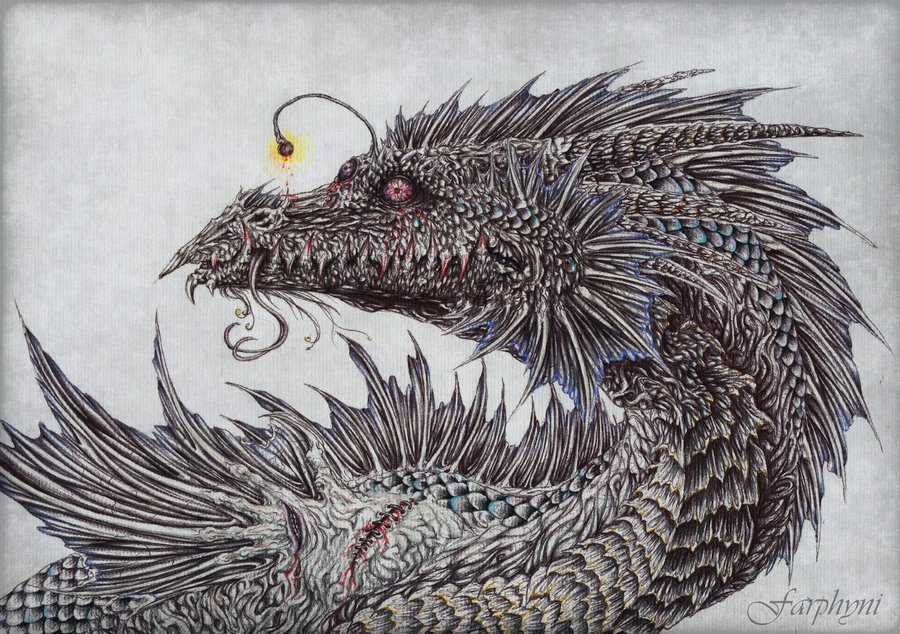 This is another story that takes on earth and not on one of my worlds. It’s the story about Nael’tyrath (a Nok’hrou, what is a kind of sea-dragon from my first main-world Altharion) and his travel from them deep-sea to the “upper world” (where we “landcreatures” live).

Once Nael thought about taking a look on the world above him. He was so curious that he secretly left his swarm and started to swim upwards, of course slowly – because of the pressure-change and he also was a bit afraid of what he may find up there.
When he reached “upworld” he couldn’t see anything at first, because the sun was shining so bright. After a while his eyes got a bit used to that light and he was able so see, though the sun still hurt in his eyes and made them reddish and swollen. There wasn’t much to see, just some clouds above him, high in the sky. Oh – and there are some wird, small creatures (he later found out they are called “birds”), swimming in the air. He tried to swim to them, but the air doesn’t wanted to carry him up to these air-swimming creatures. “Well… let’s see if there’s something else”, he thought and started to swim towards the horizon. Soon he saw his first sunset and was deeply impressed by all those wonderful colours. He looked at himself, a grey worm with reddish eyes and felt quite ugly. He sighed quite depressed and continued to swim. Some hours later – it was already night – he reached a beach. In safe distance he stopped and looked if there’s something dangerous. He just saw some turtles laying eggs in holes. Oh! An there’s a lizard. He liked that lizard, as it was a bit similar to him. He came closer and after some more minutes he crawled on the beach – which was a quite exhausting process…swimming is way easier for him. When the turtles saw him they escaped in panic. “Wait!”, he yelled, “I won’t harm you! …I don’t eat things like you…”, but too late, they’re already away. “Well…”. He crawled to the holes in which the turtle-eggs were and shove sand over them – because he didn’t want that some turtle-egg-eating-creatures find those and eat them. When he was finished he continued his exploration. He looked around and saw some bushes. Oh! Behind one of them there’s something hiding…! Carefully -to not frighten that thing- he came closer. “Hello little thing…”, he whispered. Slowly a kid walked to him. It’s eyes were wide open, “w-what are you…?”. “I am me”, Nael replied. The kids eyes got even bigger as it saw Naels giant and many teeths, “a-are y-y-y-ou going to…to…to eat… me?”. Nael blinked and started to laugh, “No. I don’t eat things like you”. “oh. good.”, the kid said and finally also started to smile, “You look really cool, do you know that?”. Nael grinned proudly, “thank you!”, but then his grin faded into a sad grimace. The kid recognized that and asked “Did I say something that hurt you…?”. “ah…no…sorry. It’s just… everything here has such wonderful colours…and I’m just grey. I also want to have such bright colours” “hmmm,…I have an idea! Wait here!”, the kid ran away and left a confused Nael.
Half an hour later, the kid came back carrying some kind of buckets. It took a brush and started to paint on Nael. Nael watched amazed. “That’s magic!!” “No”, said the kid smiling, “that’s just art “. “Then Art is Magic!”, concluded Nael.

Nael had to dove back to his natural habit in the same night – he can’t stand the “upworld” for long. But he promised to come back one day….and maybe…yeah, maybe he’ll meet you!

After Nael came back from the “upworld” he couldn’t stop thinking about it, he loved it there, but his body can’t survive there for long. His swarm-fellows soon recognized that something has changed with Nael and so they asked him what’s wrong. Nael told them all the wonders from “upworld” and especially narrated enthusiastically about those colours. The other stared at him as he’s a total freak. From that time on the swarm separated more an more from Nael and soon…they told him to leave the swarm because he couldn’t get the “upworld” out of his mind, and such “tradition-traitors” (they think the mind of the creatures that swim to the “upworld” are infected with a special -infectious- virus that makes them think about “upworld” and let them want to leave “downworld”) as him are not welcome. Being banned from the swarm means that one is going to die. Such creatures as Nael can’t survive without a swarm. Alone they’re weak and a lunch for other bigger and stronger creatures. The big and strong ones don’t dare to attack a swarm, but lone ones…omnomnomnom.
Now Nael is diving around alone. He can feel his hunters near him. His loyality to his swarm (though they banned him, he still loves them as they’re his home, his family) and his love to the “upworld”-colours are tearing his soul into two pieces.
Then something he didn’t expected one day: he found a swarm of banned creatures, which were just like him.
So he joined their safe swarm – and now and then they travel to the “upworld” together and enjoy its colours.