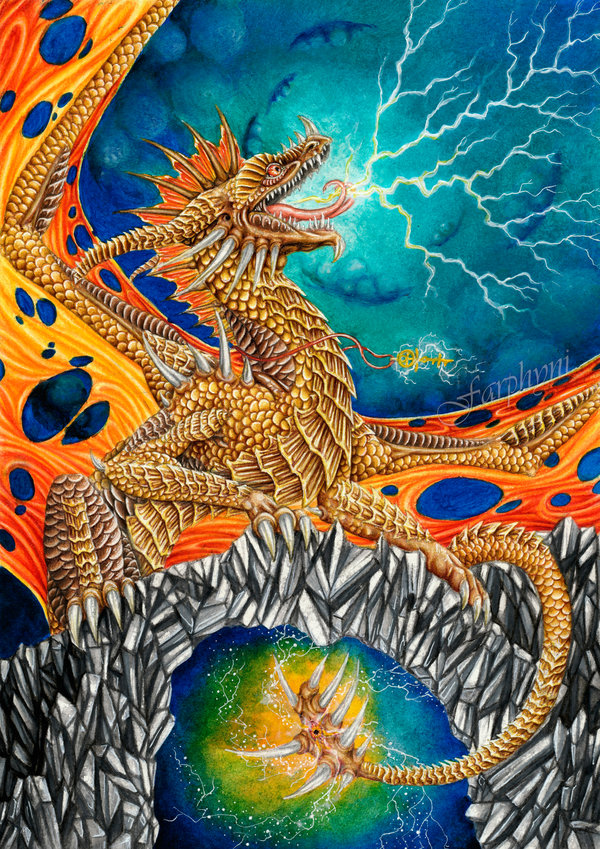 This work is about the fairytale “Cunabula” and belongs to the “Iphyon” world (my second main-world). In Iphyon are already some humanoid creatures and humans. The humans already have some kind of cities and civilisation – and most human are supressing the beasts (which are actually quite intelligent), for example dragons and other mythical creatures.
The legend of “Cunabula” is quite known in the creature-tribes and clans.
Here’s the very short version of “Cunabula”:

Many years ago, a young dragon was born in the wilds. She had beautiful, shining golden scales – what’s very rare. She was alone, had no knowledge who her parents are and to which clan she belongs or if her parents were so-called “loners” – creatures that don’t belong to any clan. She only knew that her name is “Ari’Rawah and that she has a mission in this life she doesn’t know yet. So she decided to search for that mission and travelled the world.
Many years later, when she nearly was a grown-up, after visiting many beast-tribes and the large clans, she decided to visit the human civilisation and check if she could maybe end that useless fight between humans and beasts. But the humans feared her and attacked her. They nearly killed her, despite the fact she told them she “just want to end this war and life in peace”. Especially as she’s a rare dragon and her scales are worth a lot – those humans she meet were very greedy.
She tried several times to contact the humans – but everytime they attacked her or ran away.
So Ari’Rawah fled to a cave – and her anger started growing and growing. One day she decided to kill all humans, to get rid of them – because then the beasts could life in peace.
She flew over a forest and found a group of humans, all of them armed. Ari attacked them and killed them all. She continued her way, killed many. It was quite a bloodbath. She continued her search and found a young girl chasing a butterfly. Ari landed in front of the girl, growling madly. The girl stared at her shocked, whispering “please…don’t harm me, I just want to life in peace”. Those words awaked her, released her from her bloodlust. That moment Ari realised that not all humans are bad. She whispered “Sorry” and flew away – back to her cave. She needed to think about how to solve her problem – as now she knows for sure, that this is her mission in this life.
One day she left her cave to get some food. She flew about one hour when she suddenly saw a rare creature hunted by some humans. Ari has only heard rumors and legend about those kind of creatures – they’re physically weak, but have a very strong magical and spiritual power. Ari grabbed the small creature and flew away quickly – giving the humans no chance to attack her. Ari brought the creature to her cave and asked the creature if it wants to help her change the world. Of course the creature agreed, as it has the same worldview as Ari. The creature, nicknamed “Spirity”, and Ari worked out a great plan: they want to create a small world in a paralell sphere – which shall be connected with Iphyon through Portals. It took them three years to create this world, and they named it “Cunabula”, what means “refuge/shelter/home”. As Spiritys powers created the small world, it had to stay in Cunabula all the time – otherwise it would collapse and disappear. Luckily creatures like Spirity don’t age and are immortal (if they’re not killed in a fight or use all their power). So Spirity gave Ari’Rawah the ability to open portals to Iphyon (the key-necklace in the picture and the eye at her tail help her with that).
Now Ari searched all over Iphyon for the hunted beasts and brought all of them (who wanted to) to Cunabula where they could live in peace. Sometimes she meet humans – all of them tried to kill or captured her. One time her wings got badly damaged when she defended some other beasts and afterwards she wasn’t able to fly anymore.
Of course soon the humans heared about Cunabula and sent armies to kill the beasts – though it was difficult to find portals, as they can appear and disappear everywhere – Ari controls them. But one day the humans recognized that there appears a golden lightning always when Ari open a portal somewhere – this golden ligthning is actually meant to show the beasts where they can escape to…but this time it lead the humans to the portal. Ari did their best to fight them off – but they were so many. Soon more and more creatures from Cunabula joined her and together they could defeat the humans. They brought the badly injured Ari through the portal and Spirity closed it. Two days later Ari died.
As every world has their guardian-spirit (they’re seen as gods), Iphyon also has one. The Guardian-Spirit noticed what Ari’Rawah did, and was very astonished by her altruistic life. So it decided to make her soul one of “Caeles” (some sort of saints // lower gods. Caeles were once normal creatures, but after death they got chosen by the Guardian-Spirit and their souls life on as Spirits. They’re not material, but can influence the world and communicate with the creatures/…).

Nobody knows what happened to Cunabula – if there are still portals connecting Cunabula with Iphyon. But young beasts often search form them.