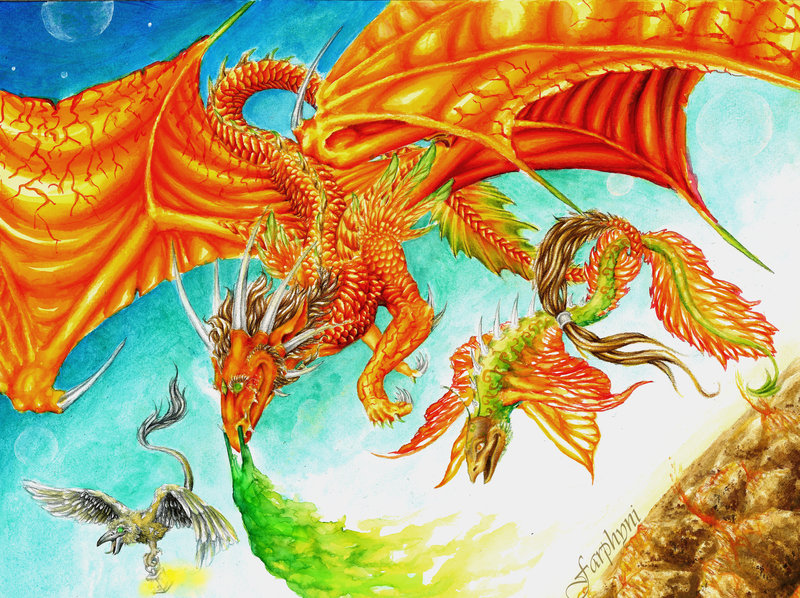 With every thought,
every word, every action,
we can decide…

Every day, every morning,
every single second, each moment,
we can decide…

We are the ones,
who choose.

There’s no destiny;
so don’t use it as excuse

This work features three charackters from an older story of mine, which I wrote during grammar school.
It’s about the dragoness (called Néwa) who gets told every day, that she’s one of the feared evil firedragons. Her family forced her to attack other creatures und fight against other dragons. It was a cruel time. And as she grew older she realized more and more that she can refuse those cruel orders. And so she did. Well, they nearly killed her, but she managed to escape with the help of the creature on the right side. It’s called Luca and she has the ability to create illusions for a short period of time (that’s how they managed to escape).
Néwa and Luca decided to travel through the world, to reject their ‘destiny’. Luca was also meant to be someone else than she is now. She should have been a offering for a god. Yes, her tribe wanted to sacrifice her. And as Luca didn’t wanted to be a offering for a non-existing god (she doesn’t believe in gods) she just flew away one night and let everything behind.
The raven with one leg is Chrakaá. He meet Néwa and Luca just a while ago. Before he lived with his flock as one in a thousand. And as he didn’t wanted to be just a number in a giant tribe, where one is like another and nobody is special, as they’re kinda “copying” each other, he left his flock when he saw Néwa and Luca one day.
Now they live out the true meaning of (their) life: There’s no destiny, choose your own path/way/wind. And it harm none, do what you want to. And so, feel free.
Now these three are free. Flying over the burned land, though everybody told them “they won’t make it, the way is too long”. But they believe in their self, dance with the wind through the sky and yes, they’ll make it and find a so far undiscovered land.