Hunter of the Sun 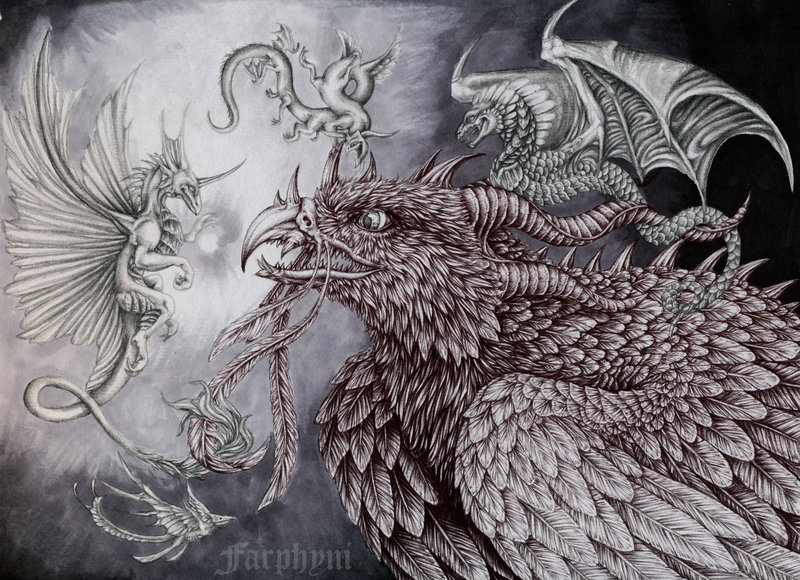 Hunter of the Sun END_OF_DOCUMENT_TOKEN_TO_BE_REPLACED

Again, this is another fairytale from one of my worlds.
The large bird is called Trodaire’dòiteáin and the population of the planet Iphyon believes that he chases the sun around the planet (without him, the sun wouldn’t move).
There’s also a fairytale about this guy. It says that Dai chases the sun day by day and with every day he chased the sun he fell more in love with the suns brightness, spiritedness and wonderfulness. One day he decided to catch up with the sun…and the fairytale says he was also jealous (though we don’t know for sure if that’s true). When he catched up with the sun, he swallowed it. And with the sun all colours disappeared. The planet became a dull and grey world. Also Dai lost all his wonderful colours. This greyness made him more and more sad. But he didn’t know how to get the sun back. So he met his three friends: Cloud (the amphitere at his horn, who is responsibly for creating clouds and rain), Breeze (the smallest creature; who can create winds) and Rainbow (the long thing with the many legs/arms/wings; who makes rainbows) and asked them for help, but also didn’t know any way to get the sun back. “Though”, said Cloud, “Maybe Luxanthia can help you. She’s the god of light, isn’t she?”. So the four of them decided to summon Lux and Lux appeared. Lux saidly looked around wailing about this greyness and dullness. Of course she wanted to help Dai so she told him to open his beak. As she’s able to influence/manipulate energy she was able to draw the suns energy out of Dai and forming the sun again. Und Dai started to chase it around the planet again.