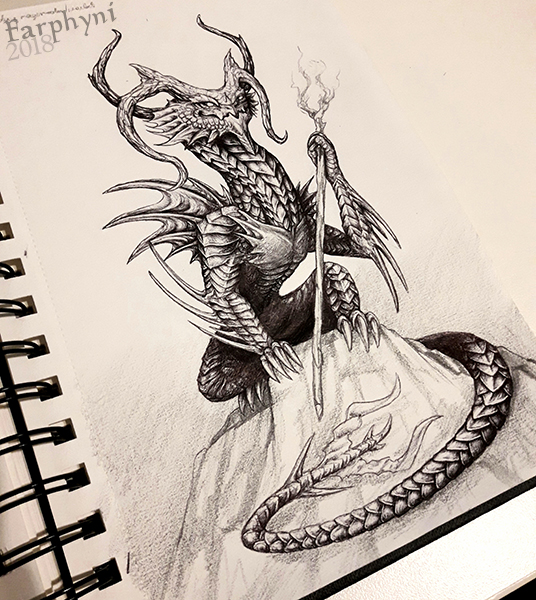 “We knew nothing. The gaps in our knowledge were vast, even if we wished otherwise. Often, we ignored the facts right in front of us. Our blissful ignorance multiplied without pattern or remorse. And even if we knew something, had heard something, were -almost – sure of something, we wouldn’t ever know the truth, or come anywhere close to it. The truth had to be seen – and even though our eyes were sharp … we were blind. Blinded by our ignorance, by our illusionary hope.”

Another OC, belonging to past of the third world, Iphyon. Her name is  Maahirah and she is a crested vigildragon – a species that has some human-like traits and is close to extinction.
Crested Vigildragons used to be powerful warlocks, but over the years the magic in their blood ceased (for reason they didn’t understand) and there was only one powerful warlock left. He took Maahirah in as student, as she seemed to still have that magic inside her and taught er how to be a warlock, because he knew that his days were numbered and he would die soon – not being able to protect his fellow vigildragons from rivalling tribes and wild beasts anymore.
After finishing her apprenticeship Maahirah guarded the territory of the crested vigildragons. Her sharp eyes saw everything – even through solid objects, as she was able to see the motion of the astral energy.
Her master died soon after her graduation what made Maahirah the last guard. All the years she searched for ways to bring back the magic her tribe used to hold. She looked for an answer why the magic has ceased and why she still has it in her blood while others did not. She couldn’t find an answer and in the end wondered if she and her race were nothing more than a simple caprice of nature.
Many years later the crested vigildragons went extinct, but paved the way for the uprising civilisation of half-human/human-like creatures.