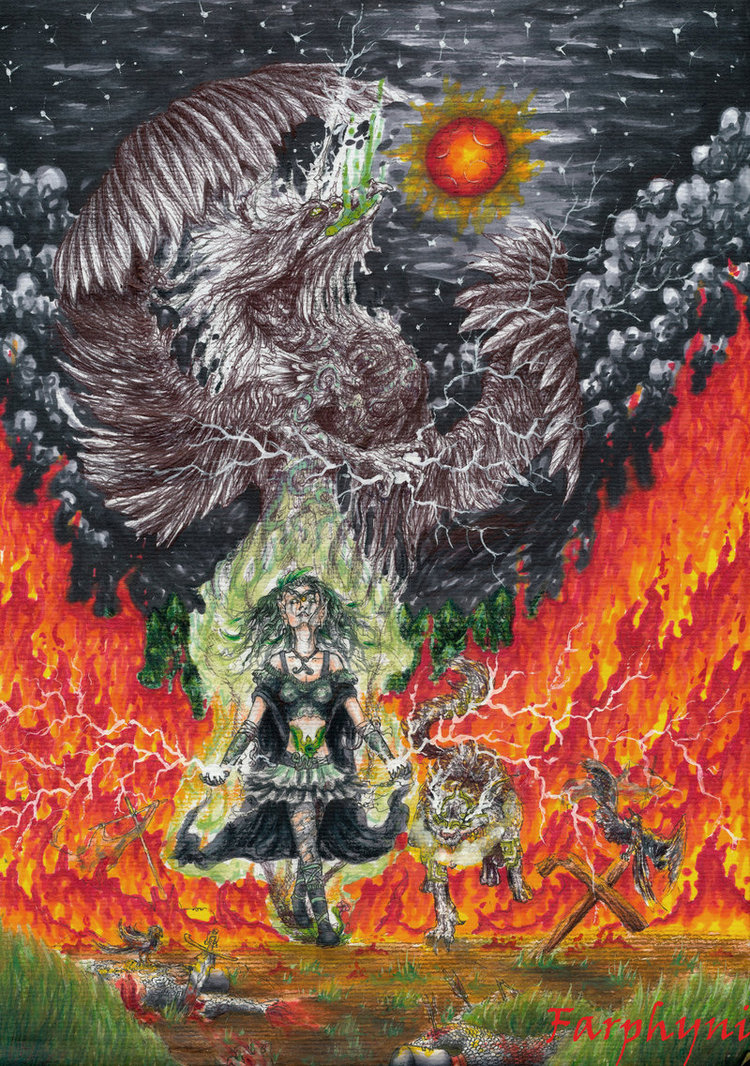 This work belongs to one of my side-worlds.

The young woman, Nytheria, grew up in a world full of war. Humans against Humans, Humans against Beast, Beast against Beast. The only one she trusted was her fellow, the wolf-cat Giomanach, who she has found a young whelp before her parents died in the war. She left her home and went through the silent battlefield, looked at all the bleeding and dead bodies.
She travelled through the land, saw war, hate and pain & with 18 she decided that she wants to clean the world from all the blood and dead bodies. But how?
During this time she meet the God Uur’zcha – who had the same goal as Nytheria. But the problem Uur’zcha had was, that he couldn’t affect the material world, as he is just an astral spirit (but he can turn visible for material beings). He decided to travel with Nytheria.
And so they wandered through the world.
One day Uur’zcha had an idea: he tried to transfer parts of his special power to Nytheria – and it worked!
From this day on Nytheria could use magic. She was especially talented in using lightning and fire spells and so she burned down the battlefields with Uur’zchas power. Also, some of Uur’zchas power leapt over to Giomanach, so he also could use lightning and fire magic.
Since this day they wandered around, cleaning battle fields – and they continued doing this until Nytheria died on day at the age of twohundredandeightyfour – she could became that old because of the transfer from Uur’zchas power to her. Giomanach died about ninty years before her. When he died he became an astral spirit and still acommpanied Nytheria and Uur’zcha. The same happened to Nytheria when she died.
After both turned to astral spirits they could affect the material world anymoe – just like Uur’zcha. So they started to search for another human or creature that shares the same goal as them.
And that’s how it started again. And it will continue this way, until the population stops fighting themselves.