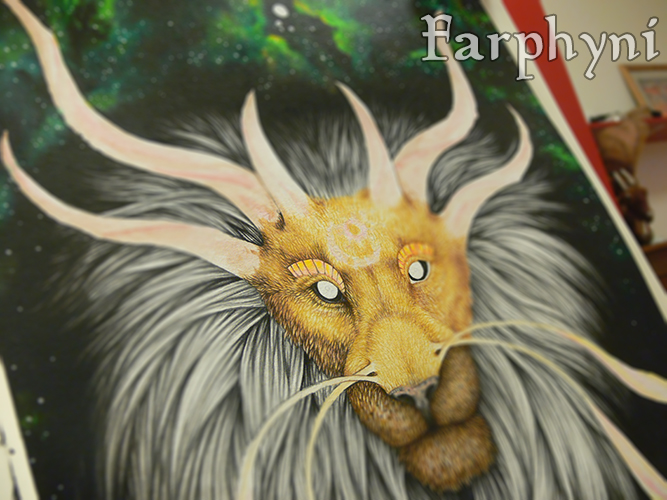 A WIP-shot from one of my recent works. Beside some sketches, art for friends, etc I have started with a large project 2-3 weeks ago – my first time drawing on A2-size, yay! So far I’ve worked on it about 25 hours with acrylics, tempera, ballpoint pen and coloured pencils. It’s a work about the creature I called Causa so far – who finally told me her true name too ;D (first The Whisperer, now Causa – an eventful time indeed) – as I began to truly understand her and what she represents. And with her comes the understanding for Incussus, her “counterpart”. When thinking about it, it’s somewhat hilarious how the change of one puzzle-piece can effect the whole puzzle – including the connections between Nywvre and Erroth’Xero as well as Farphyni and Chichiro’chiyo, while reinforcing Gawynderethéas position in between the obvious and the subtle – and the previous system got scrapped.
The title from this blog entry refers both to the new large paper-size as well as to “Causa” herself – as her symbolism is a greater one than actually expected (and she also strengthened Incussus meaning that way). x)